more than two weeks. The last new infection was detected on July 15th. Health and Wellness 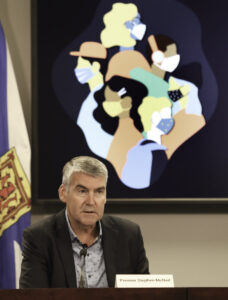 travelled outside Canada. The two have been in self-isolation since returning to the province.

During a briefing today, Premier Stephen McNeil said both people did not come into contact with anyone when they arrived home. However, he said, they may have been in contact with people on their flight.

Strang explained the province is making masks mandatory now, as opposed to earlier, because the evidence on both the virus and the effectiveness of masks use in the general  public has evolved. He said they now have evidence and expert recommendations that the general wearing of masks is effective  in reducing transmission.

Adapting the approach as evidence evolves should be seen as a positive, said Strang. He said it’s important to make masks mandatory now, even with a few active cases, is part of being prepared for the likely occurrence of a second wave.

Strang defined indoor public places as any indoor space where the members of the public can go without needing a membership or security pass.

There are 126 new cases of COVID-19 in the province and 103 recoveries.  Nova Scotia Health and Wellness department officials say 106 new infections are in Central Zone, nine in Eastern and Western Zones and two in Northern Zone. Premier Iain Rankin says the latest numbers are a reminder that while the province is on […]

Provincial Health and Wellness department officials are reporting 86 new cases of COVID-19 and 115 recoveries. There are 66 new infections in Central Zone, 11 in Eastern Zone, four in Western Zone and five in Northern Zone.  Premier Iain Rankin says he’s pleased with the declining case numbers, marking the first in double digits in […]

Nic Dowd deflected in T.J. Oshie’s shot 4:41 into overtime to give the Washington Capitals a 3-2 victory over the Boston Bruins in Game 1 of the first-round playoff series. The Capitals lost starting goaltender Vitek Vanecek to a lower-body injury early on, and backup Craig Anderson made 21 saves. Jake DeBrusk and Nick Ritchie […]