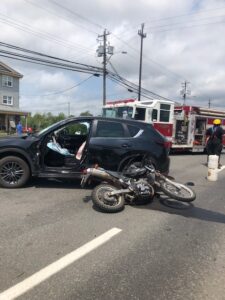 River Road in New Glasgow.  New Glasgow, Stellarton and Westville Police, RCMP, New Glasgow Fire Department and Emergency Health Services were called to the scene shortly after noon.  The crash involved an SUV and a motorcycle on the Northbound Lane of East River Road between Pine Street and Atlantic Drive.

The driver of the motorcycle, a 56-year-old man was airlifted to the QE-2 Health Sciences Centre in Halifax.  The driver of the SUV sustained non-life-threatening injuries and was taken to the Aberdeen Hospital. Emergency crews and New Glasgow Public Works closed East River Road to traffic for more than two and a half hours.  A collision reconstructionist was called to the scene and the investigation is continuing.