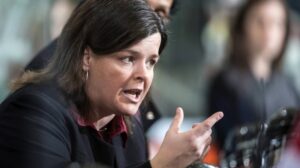 Haley, from Westville, will take over a team that will compete in next year’s Women’s World Hockey Championship in Halifax and Truro.

Haley coached the Saint Mary’s Huskies Women’s Hockey Team for 14 seasons, before taking over the women’s hockey program at Toronto’s Ryerson University in 2011.

Haley was also an assistant coach with the Canadian Women’s National Team that won gold in 2014 at the Sochi Olympics and the silver at 2008 and 2013 world championships.

She also won gold with Team Canada at the under-18 Women’s World Hockey Championships in 2010 and 2007.