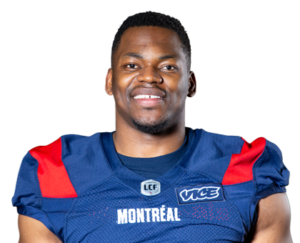 Muamba has been named to the All-Time Roster of the CFL’s Montreal Alouettes. Muamba, a two time CFL all-star linebacker is one of two active members of the Alouettes to make the list, the other is defensive lineman John Bowman.

The Alouettes’ all-time roster is led by quarterback Anthony Calvillo, the league’s all time passing leader and running back Mike Pringle, the CFL’s leading rusher. Other players of note named to the roster include receivers Ben Cahoon and Peter Dalla Riva, kickers Don Sweet and Terry Baker, Defensive Lineman Junior Ah You and Defensive Back Gene Gaines.