Eight of Canada’s top Academic All-Canadians from the 2018-2019 season, including St. FX X- 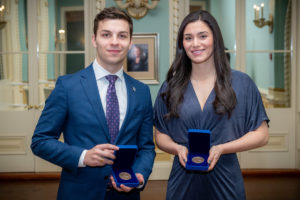 In the 2018-2019 season, more than 32-hundred U Sports Student-Athletes achieved Academic All-Canadian honours, having maintained an average of 80 per cent or better over the academic year, while competing in one or more university varsity teams

Long time volunteer Gregg MacDonald is running for Pictou County Councillor in District 11. The Moose River resident advocates for rural cell and internet service. He views the poor service in his district as an economic and safety issue, noting First Responders and businesses are at a disadvantage and public safety has been impacted. He […]

Gasoline Down Less than One Cent , Diesel Price Unchanged

There’s not much change in the price of gasoline this week. The Utility and Review Board set it’s weekly petroleum prices overnight. Gasoline dropped 0.7 cents a litre. The minimum price for a litre of regular self serve unleaded is now 92.6 cents in the eastern mainland and 93.4 cents on Cape Breton. There’s no […]