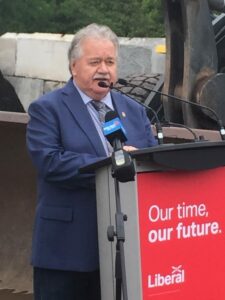 Antigonish to the Canso Causeway is the next step in major highway improvements in the province.  Yesterday, party leader Iain Rankin indicated it would ask Ottawa for support to twin that section of the 104 and a portion of Highway 103 to Bridgewater if the Liberals are re-elected.

Hines, who is the province’s Transportation and Active Transit Minister says twinning the 104 from Taylor’s Road to the Causeway was considered when government reviewed twinning sections of 100 series highways several years ago.  Sections of four 100 series highways were selected in 2018, including the 104 between Antigonish and Sutherland’s River.   With those highway upgrades underway, Hines says it can turn its attention to other projects,including the 104 east of Antigonish to Cape Breton.

Rankin says if re-elected, the province will submit applications to the National Trade Corridors Fund, which provides up to 50 per cent of the project cost. The estimated cost of the two projects is $237 million.