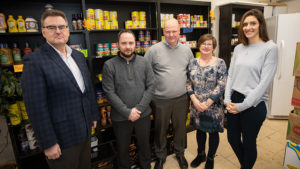 scholarships and bursaries for the school’s human nutrition students.

Sodexo is offering two $5,000 individual scholarships. One will go to the top ranking incoming first year student and a second to a third or fourth year student from Nova Scotia, New Brunswick or Prince Edward Island who is interested in working in the food service industry.

Sodexo is also providing the Kevin Fraser Memorial Bursary. Named in memory of the former Sodexo general manager at St. FX, the five bursaries valued at $1,000 each are presented annually to a first or second year student. The bursaries are awarded based on financial need.