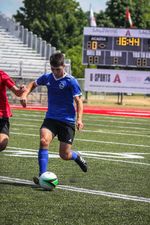 Antigonish’s Myers Hayne will be one of the locals heading to Niagara to take part in the 2022 Canada Games.

A soccer player, Hayne will be manning the back line for the men’s side looking to improve on a seventh place finish in the 2017 games. Hayne plays his club soccer with Suburban FC, a squad he has been a part of since U15. He also plays high school soccer for the Dr. JH Gillis Regional Royals.

Having played with the Nova Scotia provincial team since U12, Hayne said official tryouts began in October, with the team playing all winter before finalizing a roster.

Hayne said the team looks strong heading into the Canada Games, and they’ll kick off the round robin play on August 7 against Alberta. They will then play Yukon the next day.