The Town of Antigonish presented two Good Neighbour Awards over the weekend.  The presentations were made Friday night as part of the Canada Day celebrations and fireworks at 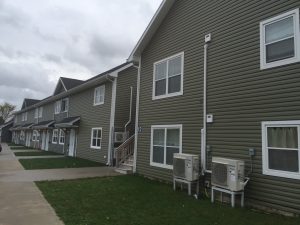 Columbus Field.  One of the awards went to the Special Olympics Canada National Summer Games, co-hosted by Antigonish town and county and St. FX University.  The 2018 games attracted some 11-hundred athletes and coaches; more than 12-hundred volunteers were involved in the national event.

The other Good Neighbour Award winner was the Antigonish Affordable Housing Society.  Last fall, the group celebrated the official opening of the second phase of its affordable housing complex, Riverside Estates.  Society Chair Colleen Cameron says she is surprised and touched by the honour.
Cameron says her group is beginning plans for a third phase.  The town also made presentations to its volunteer of the year, Gladys MacDougall and youth volunteer of the year, Hillary Broussard.  MacDougall and Broussard were announced as award winners in the spring.