The StFX Female athlete of the week is X-Women Basketball guard Aliyah Fraser. Fraser, a 2nd 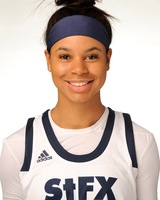 year Science/Health student from New Glasgow,  was the X-Women Basketball PACE Player of the Week and was game MVP as leading scorer of their weekly Friday scrimmage. This past week she represented StFX by promoting Keep it Social, an AUS social media and video initiative to promote safe socializing practices on university campuses.

Fifth year QB Bailey Wasdal, a Business student from Calgary is the STFX offensive player of the week.