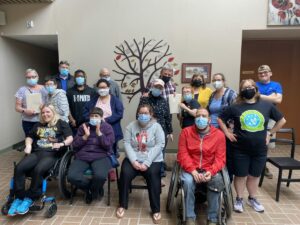 L’Arche Antigonish has again been a success.  It garnered $13,921 with money split equally between CACL and L’Arche.  Bernie Vosman’s sister Joan says the family is deeply touched by the generosity of the community both locally and beyond.

L’Arche Community Leader Beth Wolters says the support from the Vosman family has been tremendous.

Over the past five years, Bowl with Bernie has raised $56,670.   The Vosman family says they will be taking a break from fundraising after completing a five year commitment with the Bowl with Bernie project, but are looking at other possible ventures with the two organizations down the road.