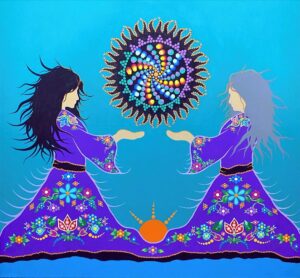 “Keepers” by Mi’gmaq artist Tracey Metallic was unveiled as the visual theme for the Circle of Abundance initiative during the November 19 virtual announcement. (Coady Institute photo)

at St. FX University’s Coady Institute has reached its goal.  A virtual ceremony announcing the milestone for the initiative called the “Circle of Abundance, Amplifying Indigenous Women’s Leadership” was held by the Coady Thursday afternoon.

Fund-raising for the campaign officially kicked off in July when movie stars Ryan Reynolds and his wife Blake Lively donated $200,000.  That was quickly followed by an announcement by the  Jeannine Deveau Education Equity Endowment Fund it will match the $200,000 donation from Reynolds and Lively.  The endowment also agreed to contribute up to another $300,000 to match new donations, for a total commitment of $500,000.

Karri-Lynn Paul, Indigenous Program Teaching Staff at the Coady, says the money raised is already reaping benefits, with plans for the future.