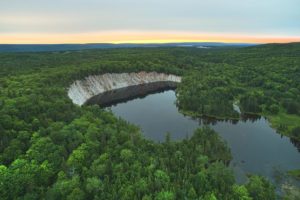 A Gypsum landscape in Cape Breton the Nature Conservancy of Canada protected about two years ago. (Photo by Mike Dembeck)

Kathryn Morse of the Nature Conservancy of Canada says the government pledge is significant.
The NCC’s work in Nova Scotia began in 1971, with the protection of a 520 acre  property at Sight Point in Inverness County’s Mabou Highlands.   Last fall, the NCC announced it has protected three habitats on Cape Breton Island totalling 676 acres in the Iona, Marble Mountain, and West Lake Ainslie areas.