The three levels of government are joining forces on a $3 million project to build seven kilometres of new multi-use pathways and crossings in Port Hawkesbury. It will complete 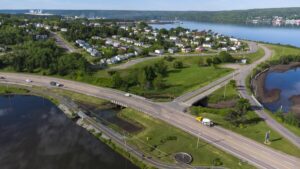 The province is spending $1 million, the federal government is devoting $1.2 million, and the town is committing $800,000 to the development, which also connects to the Nova Scotia Blue Route cycling network.

Premier Iain Rankin, who was in Port Hawkesbury for the announcement says with these clean transportation options, more people will be able to get outside and move around in ways that promote better health and a cleaner environment. Other dignitaries included Transportation and Active Transit Minister Lloyd Hines, Cape Breton Canso MP Mike Kelloway and Port Hawkesbury Mayor Brenda Chisholm-Beaton

The project will add on and off-road pathways connected to the waterfront (2.5 kilometres), MacQuarrie Drive (one kilometre), Reeves Street (700 metres), The Nova Scotia Blue Route connection at Tamarac Drive (500 metres)  and an eastern town connector (2.3 kilometres).

Work begins later this summer and will take five years to complete.