Taylor has experience as a player in the NCAA and Canada’s national soccer program. Taylor 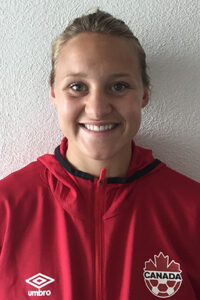 from Conquerall Mills played with Boise State University where she captained her team in her final two seasons, in 2016 and 2017. She earned a double major with a Bachelor of Health Science and Bachelor of Pre-Medical Studies degrees.

The midfielder also played with the Canada Under 20 National Team, competing at the World Cup in Papua, New Guinea in 2016. She was also Nova Scotia’s Female Athlete of the year in 2017.

She is also a recent Education graduate from Mount Saint Vincent University, where she was an assistant coach with the women’s soccer program. She also has extensive coaching and volunteering experience with several Nova Scotia minor soccer associatiions.

Taylor will be joining the X-Women Soccer Program in mid-August.