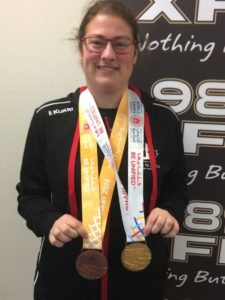 Nicole Roberts of Antigonish won the Frank Hayden Award. The award, named in honour of one of the pioneers of the Special Olympics movement, recognizes long-time dedication to sport. Pictou County’s Lesley Sobey was named Special Olympics Nova Scotia Volunteer of the Year. Formal presenations of the awards will be made at a Special Olympics Gala in Halifax in January.

Peter MacKay officially enters the Race for the Leadership o...

Former Central Nova MP Peter MacKay has announced he’s in the running for the leadership of the federal Conservative Party. Standing before a huge Canadian flag and a crowd of supporters MacKay says he felt compelled to run in part because of the actions of the current Liberal Government. Nova Scotia PC Leader and Pictou […]

Peter MacKay to announce his Candidacy for the Conservative ...

Former Central Nova MP and cabinet minister Peter MacKay will officially announce his candidacy for the leadership of the Conservative Party on Saturday. In a video posting on Twitter this morning, MacKay says he will make the announcement Saturday morning at 11 a.m. at the Museum of Industry in Stellarton. He’ll also broadcast the announcement […]