Smith said her career on the water began in the summer of 2021, when she was spotted 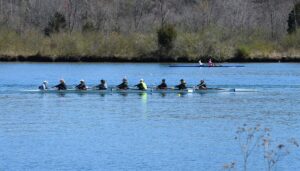 helping out at the dock in Lochaber by StFX rowing coach Katie Edwards. Edwards invited Smith to get on a boat the next week and Smith ended up as a coxswain, the person who faces the bow of the boat, steers and coordinates the rowers.

After a couple of weeks of selection camp earlier this year, Smith was named to the team.

Smith will join some of her StFX teammates, with Madison Taljaard, Jack Petrunick and Peter MacGregor, who are also rowing for team NS, and Chloe Stubbert, who is competing in the triple jump for New Brunswick.