St. FX X-Men Running Back Malcolm Bussey is the school’s Football Offensive Player of the 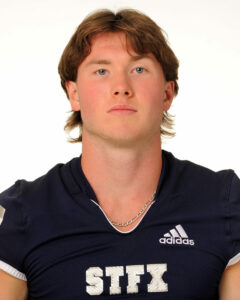 Week. Bussey, a first year Arts student from Hammonds Plains was the player of the game in the X-Men’s 27-22 semi-final win over Acadia on Saturday. Bussey had 22 carries for 258 yards, including a four-yard rushing touchdown in the second quarter.

Defensive Back Liam Wilde is the St. FX Defensive Player of the Week. The fourth year Arts student from Calgary had four tackles in the win over Acadia, including 3 solo tackles. He also had a key interception late in the second quarter, picking off a 29-yard Acadia pass.

The Special Teams Player of the Week is Kicker/Punter 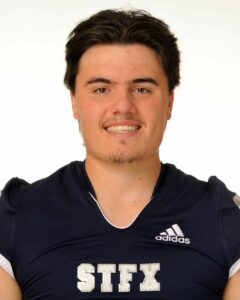 Max Capriotti. The third year Human Kinetics student from Mount Hope, Ontario scored 9 points in the semi-final win over Acadia with two field goals and 3 extra points. He had a 36-yard field goal in the first, and a key 42-yard field goal late in the second quarter to pull the X-Men within two points of Acadia. He also had eight punts for 302 yards, averaging 37.9 yards per punt.