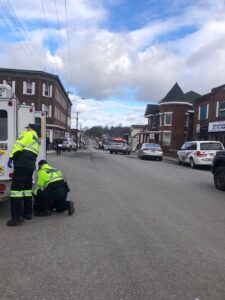 Street area.  Police say at around 1:10 this morning, officers were called to a home on that street on a report of a disturbance.  Police say after an investigation and a brief interaction with officers, a lone adult male barricaded himself in the home.    Police and the town’s fire department closed nearby streets for several hours during the incident.

A man was safely apprehended at 12:30 this afternoon by police, with help from the New Glasgow Regional Police Major Crime Unit, New Glasgow Fire Department, Emergency Health Services and the RCMP’s Critical Incident Team from H-Division Nova Scotia.  The man was detained under the Involuntary Psychiatric Treatment Act.  No one was injured.

A 41-year-old man has been charged with Uttering Threats and Mischief.