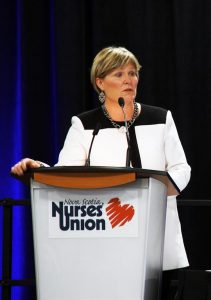 The report, prepared by an expert on long-term care staffing, Dr. Charlene Harrington has made 15 recommendations.  Union president and Antigonish native Janet Hazelton says one of the key recommendations is a minimum of 4.1hours of care per resident per day to keep vulnerable seniors safe.  The current ratio is 3.45 hours a day.
Hazelton says if the government would agree to these ratios it would mean a 20 per cent increase in staffing.  That would translate into an additional 600 nurses, a combination of RN’s and LPN’s; and 14-hundred Continuing Care Assistants