Tributes are being paid to local Businessman John F. Green. Green, the founder of Green’s 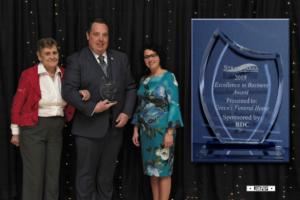 In a Facebook post, the Strait Area Chamber of Commerce says Green’s passing is a shock, and his loss will be felt in the region. The chamber noted that just last week, Green accepted the Excellence in Business Award at its annual Fall Dinner and Awards gala.

Also mourning Green’s passing are members of his profession in the funeral home industry, where Green was president of the Funeral Service Association of Nova Scotia. The Association noted Green spent more than two decades dedicating his life to the funeral profession, not only serving the community he loved but volunteering his considerable talents to boards and associations both provincially and nationally.

Mass of Christian Burial for Green will be held on Monday.

It’s an opportunity for St. FX University students to network with employers.  The event, to be held Thursday night from 6 to 9 p.m. in the Bloomfield Centre’s MacKay Room is called “Connect @ X”. One of the organizers of the event is 4th year St. FX Business Student Kelsey Bowman.  She says there will be […]

Officials with the Northern Pulp mill say they have started issuing layoff notices to salaried employees. The company is taking the measure after the province decided not to extend the deadline for the closure of the Boat Harbour treatment facility. The wind down of operations began earlier this month. The company says the majority of […]