St. FX Athletics has announced its Athletes of the Week. Head coaches will submit nominations 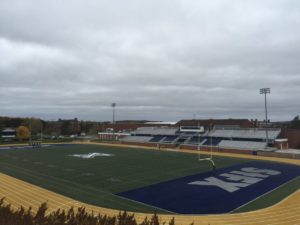 and awards will be given to two student-athletes, recognizing outstanding contributions in practices and intra-squad events, and for leadership and dedication outside their sport. X-Men Football will name a weekly offensive, defensive and special teams player of the week.

The St. FX Female Athlete of the week is X-Women Soccer defender Olivia Sellentin, who has made a great comeback to the pitch after being away from 11-aside soccer for two years.

The Male Athlete of the Week is X-Men Cross Country Runner Graydon Staples, who came in first at a recent 5 K event at Keppoch Mountain.

The St. FX Football Offensive Player of the week is receiver Benoit Cormier, the Defensive Player is defensive lineman Chris Rambi and the Special Teams Player is linebacker Jacob Morgan.