A well-respected Sociology Professor at St. FX University who pioneered courses on race and 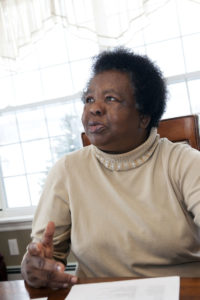 gender has been posthumously honoured by her peers. Recently the Canadian Sociology Association awarded Dr. Agnes Calliste with the CSA’s Outstanding Contribution Award at their annual conference in Vancouver.

A colleague of Calliste at St. FX, Sociology Professor Dr. David Lynes in his nomination letter, said Calliste distinguished herself as one of the country’s leading experts in the areas of anti-racism, gender and education. He says particularly influential was her research into the experience of African-Canadian sleeping car porters and their struggle for employment equity on Canada’s national railroads.

She also published research on anti-racism organizing and resistance by African-Canadian female nurses, black families in Canada and the influence of the civil rights and black power movements in the nation.