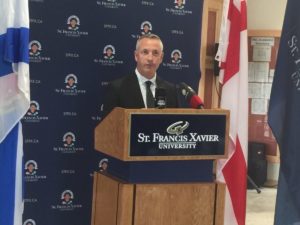 community members took part in the pair of virtual town hall meetings organized by the university. The panel included vice presidents with the university, along with president Andy Hakin in the evening session, as well as county warden Owen McCarron and town mayor Laurie Boucher.

Wamsley said the idea behind the meetings was to share information regarding the school’s plan for bringing students back to the area following the holiday break. He also noted a number of students will be staying in town or residence instead of heading back home.

With it not being a normal year, Wamsley said they tried to extend the holiday vacation a bit, noting students didn’t have a reading week this year and it’s important they have time off. The exam period is ending four or five days earlier than usual. Move in days for students outside of the Atlantic bubble are January 4 and 5, with the schools neighbours helping neighbours program in place. Classes will be online beginning January 13 and January 19 as a move in day for students living within the bubble. Face to face classes will beginning on January 20th.