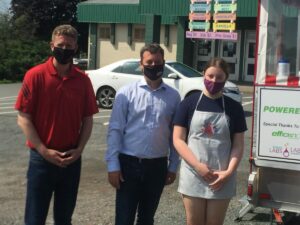 Rankin and Antigonish Liberal incumbent Randy Delorey also had an ice cream at the trailer, located this morning at the Antigonish Farmers Market.

It could be a first in Canada.  A new seasonal student-run business in Antigonish, Happy Cones, 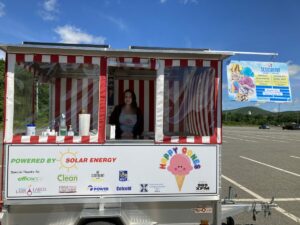 is now open. The trailer, located in the Antigonish Market Square parking lot is completely solar powered.  Happy Cones will also be at various spots throughout the summer

Entrepreneur Nicky Nicholson, a student at Dr. JH Gillis Regional High School says it is designed to promote the incredible benefits of solar energy to the town, community and province.  Nicholson says the idea for the business was created through the St. FX Innovation and Enterprise Centre.
She says the centre helped her with such issues as getting the business started, creating a name and other details.
989XFM is a media sponsor for Happy Cones