Two members of the St. FX X-Women hockey team have developed a sexual violence and 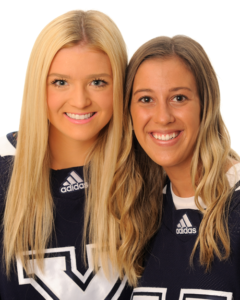 awareness package for sports organizations across the country as part of mandatory training for athletes and all members in leadership positions. Amy Graham and Antigonish native Patti-Anne Tracey are among six St. FX students that were recipients of Wallace Family Internships. The internships are worth up to $6,000 each or $10,000 for a team to work full-time for 12 weeks on an innovative project.

Graham says their modules on preventing sexualized violence have taken a novel approach by focusing on coaches of athletes in their mid to late teens.

Graham says when she and Tracey transitioned to university athletics, they received training on sexual violence and prevention. However, this training was not offered prior to that. She says research on campus sexual violence shows near one third of all sexual assaults on campuses are perpetrated by athletes.

Tracey says it’s hoped their modules will become mandatory training for coaches prior to the start of their season. Graham says the Canadian Association of Coaches have agreed to review their modules.