Members of the St. FX University community and local residents paused to pay tribute and 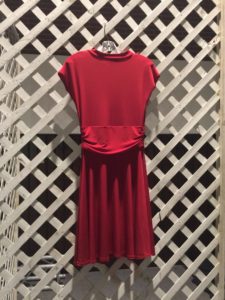 Red Dress hangs in the MacKay Room during a vigil marking the 30th anniversary of a mass shooting at a Montreal engineering school.

remember the 14 women killed in a mass shooting at a Montreal engineering school three decades ago today.

A vigil was held at the university’s MacKay Room over the noon hour today.  Speakers told the audience that 30 years later, gender-based violence remains a reality in our society.  Half of Canadian women experience at least one incident of physical or sexual assault after the age of 16.  Approximately every six days a woman is killed by her intimate partner in Canada.
Women’s advocate and the Chair of Syria Antigonish Families Embrace, Lucille Harper urged  audience members to raise concerns about gender based violence to enact change.
At the ceremony, a red dress hung at the front of the hall to remember murdered and missing indigenous women and girls. Also fourteen red roses where brought to the stage, symbolizing the 14 women who died in Montreal on this day 30 years ago.

It’s an opportunity for St. FX University students to network with employers.  The event, to be held Thursday night from 6 to 9 p.m. in the Bloomfield Centre’s MacKay Room is called “Connect @ X”. One of the organizers of the event is 4th year St. FX Business Student Kelsey Bowman.  She says there will be […]

Officials with the Northern Pulp mill say they have started issuing layoff notices to salaried employees. The company is taking the measure after the province decided not to extend the deadline for the closure of the Boat Harbour treatment facility. The wind down of operations began earlier this month. The company says the majority of […]