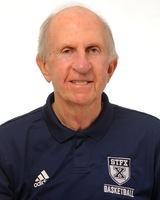 as he led his team onto the court for the final time in a varsity game.  Konchalksi’s X-Men defeated Acadia 99-76 in the inaugural Coach K Challenge, an annual game between the two teams.  It was Coach K’s 919th victory.

Konchalski says he has enjoyed his 46 years at St. FX, allowing him to pursue the passion of his life, to coach young men and develop the basketball program.

Konchalski led the X-Men to three national championships and nine AUS conference titles.  He’s also coached at the national level as an assistant and head coach.  He’s a member of the Acadia, St.. FX, Nova Scotia and the Canadian Basketball Halls of Fame. Konchalski retires at the end of the month.

A 62-year-old Pictou County man is facing several charges including weapons related offences and Uttering Threats in connection with an incident this week. Police say on Monday, officers were called to a home on Reservoir Street in New Glasgow after receiving a report of a man who threatened an animal control officer with a weapon. […]

Central Nova MP Sean Fraser says there are a number of measures in this week’s federal budget that will be welcomed by residents of his riding.  Fraser says the budget aims to maintain a focus on defeating COVID-19 as quickly as possible, creating jobs and growth in communities and setting the stage for a recovery.  Fraser says in fighting […]

Local Players named to the Nova Scotia Under 18 Major Hockey...